My great-great-grandmother, Martha “Lena” Fulghum Tidwell, was someone I longed to know more about. Although I will never have her full story, I did make an amazing find when I discovered details of her divorce in records on Ancestry.com. I was already heartbroken for her when I learned her husband committed suicide, and the divorce records from her second marriage just added to my sadness. While I’m not typically a “hugger”, I just wanted to give Lena a big hug.

The youngest, Ismay, was my great-grandmother. She was nearly two years old when her father died on December 11, 1901. Read the newspaper article here.  I don’t know what kind of issues Lonnie and his family had been facing. It wasn’t easy – that’s for sure.

Widowed at 36, life must have been hard for Lena. She had seven children to care for. She found her husband dead. It was published in the Nashville paper, the Tennessean, and even as far away as Union City, so word got out about the tragedy. Details are sparse, but we know Lena pressed on. Her children that were old enough helped on the farm and Lena started sewing for her neighbors to make extra money.

About a year later, Lena married Dave Richardson in Dickson County, Tennessee on August 28, 1904. They were only married seven weeks before Lena requested a divorce. During their short marriage, Lena became pregnant with her daughter, Verona Brent Richardson.

Finding their divorce record was finding a goldmine of information. The packet has many pages, most are handwritten. To sum it up best, here are three pages that are typed for easy reading: 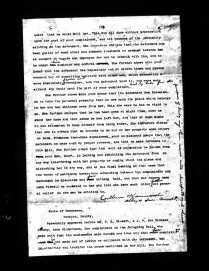 She states that Dave was abusive to her and didn’t want to work. She had a farm, five minor children, and needed some help. Dave wasn’t the guy who she thought he was. The divorce was granted. Lena was able to keep her property that she had before the divorce. Dave wasn’t allowed around anymore and Lena was allowed to use the last name Tidwell again. She also got full custody of Verona.

I had wondered why I couldn’t find records for Dave prior to finding this. Luckily, the divorce packet after Lena’s was one for a lady named Mollie Richardson. Mollie divorced Dave not long before he married Lena. She accused him of much of the same.

On March 15, 1909, Lena lost her mother, Martha Woodward Fulghum, also to suicide. Here is the newspaper article that ran in The Nashville American on March 16, 1909.

In 1910, Lena and her family are still living at the farm. She lists her occupation as full-time seamstress. I can tell Lena was a strong lady. She was met with so many hardships, including struggling with the farm, but kept it afloat for at least nine years.

On January 29, 1916,  the Tennessean newspaper wrote that Lena was a guest to her sister, Harriet Sneed. Since it says Lena was from Burns, I am guessing she was still living there in 1916.

Sometime between 1916 and 1917, Lena sold the farm and moved to Nashville, the west side of town. She’s listed in the 1917 US City Directory as living at 3801 Park Avenue. George, Ismay and Verona live wither her. George and Ismay are listed as “helpers”. On George’s WWI draft card, he said he works for the NC & St.L railroad.

The home that once stood at 3801 Park Avenue has long been demolished, but used to be a large house. (Lena is on my mom’s side of the family, but ironically, my dad grew up close to where Lena would have lived and he remembered an old home being there when I asked him.)

The cause of death is partial obstruction of the bowels from a cancerous nodule. Contributing was “acute stomach trouble and constant vomiting.” That sounds very painful, and doctors at that time probably weren’t able to help much.

Ismay, my great-grandmother, was 17 when her mother died. Verona was only 12. They may have lived with their brother, George, after their mother died. However, to add more heartache on this already hurting family, George committed suicide a year later on June 23, 1908 while in service in Chattanooga, Tennessee. He was 23 years old.

From the 1920 census record, Ismay became a boarder in a non-family member’s home, while Verona lived with her older sister, Ina.

George and Lena are both buried in Welch Cemetery in Burns, Tennessee.

I really hope Lena had a lot of happiness in between those times of heartache. I also hope I can give her that hug one day. Until then, I hope you’re at peace now, great-great-grandmother.

Records are from Ancestry.com.

If you descend from this family, I would love to hear from you. Email me at downhomegenealogy@gmail.com.

One thought on “Lena”