I originally posted this article on July 21, 2017; however, since then, I’ve learned more about Milly. This article has been updated to tell more of her story.

Following the paper trail, Milly Fowler was born about 1800 in Pickens County, South Carolina, to Elizabeth and Joshua Fowler. Their 662-acre plantation was on the waters of Georges Creek, a long waterway that winds through present-day Pickens County. [Joshua Fowler’s Probate Records]

Milly’s marriage date to Robert Boyd Sr. is unknown, but they had one son together: Jeter Lewis Boyd born in 1822. Milly was at least Robert’s second marriage, as he already had sixteen children. Robert was 34 years older than Milly. The couple likely separated before 1825 when Robert’s son with Rachel Hinton was born. Milly and Robert never officially divorced. Their reason for separation is unknown. [Robert Boyd’s Equity Court Loose Records]

In 1830, Milly and Jeter were probably the two additional residents in her father and mother’s household. [Census records]

In 1833, Milly’s father, Joshua, passed away. I have not found a will recorded for Joshua, but in October 1833, a probate court notice lists Milly and Jeter as heirs of Robert Boyd, deceased. The “deceased” is in error, as Robert was still alive. On Christmas-day 1833, Robert relinquished any rights he had to his father-in-law’s estate to his son, Jeter. (Thank you to Catherine McClanahan Seiler for sending me this record!) By this time, Robert had five children by Rachel Hinton. 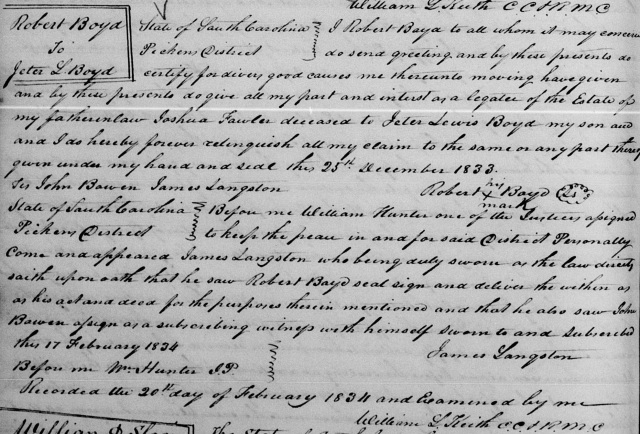 By 1835, Milly and Jeter had made a trip to Wayne County, Tennessee, likely with Milly’s mother, Elizabeth; brothers, John and Josiah; and probably other Fowler relatives. A guardianship record declares Josiah Fowler, who appeared along with John Fowler and George Whitten, as guardian of “orphan” Jeter Lewis Boyd due to his inheritance of $500 from his grandfather, Joshua Fowler. This document is incorrectly filed under Robert Boyd Jr.’s Pickens, South Carolina probate record packet. 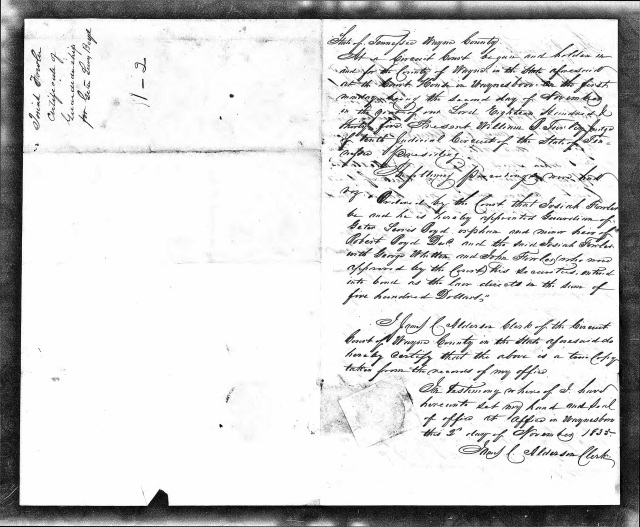 In 2019 currency, it is estimated $500 is worth more than $14,500. This document incorrectly lists Robert as deceased too, however, Robert did not pass away until 1851. Jeter had 23 half-siblings. [Equity Collection Loose Papers]

Jeter received 226 acres in Wayne County, Tennessee on the waters of Middle Cyprus Creek in 1849 due to the Nov. 2, 1847 Act of the Tennessee General Assembly.  [Early Land Records] Milly is on the 1850 census living with Jeter Boyd and his wife, Charity Bratcher.

Jeter died in 1854 at the age of 32. From his estate sale, Milly bought half a bushel and a clock.

According to the 1860 census, Milly continued to live with Charity. Milly probably died before 1870, because she isn’t on the 1870 Census. We know she lived to be at least 60 years old.

A local historian, Mrs. Berry, told my family that there are at least three graves on the Boyd homestead on Middle Cyprus Creek. Milly’s resting place could be among these.

There is more to Milly’s story than what these records can provide. I hope one day we will learn more.

If you have more information or if you’re related to this family, please email me at downhomegenealogy@gmail.com.

One thought on “Milly Fowler Boyd”