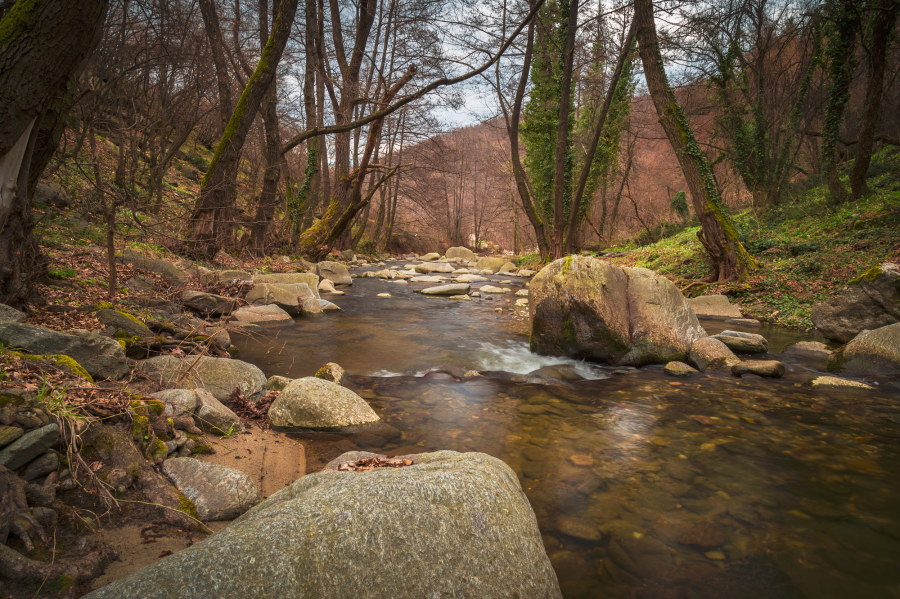 The Moser, also spelled Mosier, family came to the United States from Germany in the 1700s. AncestryDNA matches me with many Moser descendants, but I haven’t been able to establish a paper trail connecting my fifth great-grandfather, David Mosier.

David’s earliest record is the 1812 tax list in Davidson County, Tennessee. He owned 100 acres. He’s the only Mosier mentioned on the tax list. According to later records, David would have only been 17, possibly 18, if later records are wrong.

On January 3, 1826, David married Elizabeth Bennett in Davidson County. The marriage bond was issued December 31, 1825 and Dempsy Morris was the bondsman. (Source)

David Mosier bought 100 acres of land on the “Blue Spring Branch waters of Sycamore Creek” beside Thomas Watts in 1825/1826. (Early Tennessee Land Records Deed on Ancestry) The above map pinpoints where Blue Spring Branch runs off of Sycamore Creek in present-day Cheatham County, Tennessee in the Sycamore Mills area. Cheatham County wasn’t created in 1826. Cheatham became a county in 1856 and before that, this land was classified as Davidson County.

On the 1829 Davidson County tax list, David is listed with his 100 acres. No other Mosiers are present.

The 1830 Census counts David and his family.

David and wife have two children in 1830. There is an unknown female age 50 – 59, probably his mother or his wife’s mother. There is also a male age 15 – 19. This could be a younger sibling to him or his wife, a boarder, or other relative.

On Feb. 20, 1834, David sold two tracts of land on the Blue Springs Branch and Sycamore Creek to Blackston F. Binkley. The tracts were 80 and 20 acres for 100 total acres.

The 1839 Davidson County tax list has David and Simon Mosier. This is the first and only time I’ve seen the name Simon Mosier.

An undated entry in the book The Deserted Sycamore Village of Cheatham County by Lois Barnes Binkley states that David Mosier was one of the first Sycamore mill workers. He was a brick mason who made bricks and designed rock walls.

The 1850 Agriculture Selected Census list David next door to Henry Binkley and two names away from Thomas Binkley. David only has one horse, two cows, $15 value of livestock, 10 Irish potato bushels, 10 sweet potato bushels, and the last two digits on the page are hard to read. David doesn’t have much income, livestock or Agriculture compared to other men on the page.

David is listed twice on the 1850 Census in Davidson County.

In District 25, Sycamore Mills, David is living with his son-in-law, Wiley Farmer (my fourth great-grandfather). David’s son, John, is married to Mary Ann Harper and is living next door.

In District 24, David is living with a Binkley family.

There are so many Binkley families that are all related in this area. I haven’t been able to find out who Elizabeth, William, James and Brunetta were in relation to David.

Interesting that in 1860, David is on the District 2, Cheatham County census, along with his wife again.

Who are E (13, female), Jas D (10, male), and M A J (7, female)? The married within the year box is incorrectly checked for the youngest four Mosiers. These children have similar names as older children of David, so my guess is that they are not his children, but probably related.

David was a brick mason and had 500 real estate and 200 personal estate. This appears like an improvement from 1850. Son James is working as a farm hand.

In 1862, David last appears in a record, the Cheatham County tax list. We know David lived to be at least 67.

Near this time (1800) Asa Bryant. David and Daniel Mosier, with their parents and families, Matthew Harris and family, his sons being Henry, James and Nan, all settled near the site of Sycamore Mills.

This seems to indicate that David had a brother named Daniel, and that their parents also settled in Sycamore Mills.

I searched for Daniel Mosier, and found one record for that name on the 1860 Agriculture Census in Cheatham County. It’s odd he’s not on any other Cheatham or Davidson County records that I’ve found.

There is a Daniel Mosier in Wilson County, who is the right age to be David’s brother. The only information I have linking David to a Daniel is Goodspeed’s History.

Why is it important to find Daniel Mosier? It’s because this is a genealogy “trick”. Study neighbors and siblings. This could lead to a break through.

I have found a deed for Matthew Williams in 1816 in Davidson County. The deed lists Matthew’s land on “Jno. Mosers Spring Branch” on Sycamore Creek. John lived on a branch of Sycamore Creek, which is the same area as David’s land. John is probably a close relative.

Older Davidson County, TN deeds from 1788 and 1795 mention Samuel and Francis Moser. (Last name spelled multiple ways.) The land mentioned in their deeds was near Drakes Creek and Daniel Smith’s land (historic Rock Castle), which is in present-day Hendersonville, Tennessee. I’m not an expert at reading old deeds, so assignees and heirs confused me. I don’t think Samuel and Francis ever lived on this land. It appears these were land grants from the Revolutionary War. Leonard Moser, married to Maria Sarah Binkley, had sons all named John, Francis and Samuel. Samuel didn’t survive the war and his land grant is from his heirs to Daniel Smith directly for 640 acres.

Is Leonard the grandfather of David? Leonard’s descendants show up heavily in my top matches, although I’m related to the Binkley family, through Leonard’s wife, Maria Sarah. This pollutes potential matches, but since the matches are so high, it seems someone intermarried down the line.

If you have any Mosier family information or connections, please reach out to me at downhomegenealogy@gmail.com.